According to the self-reference effect, when people are asked to recall the words they assessed in an unexpected memory test, they are more likely to remember the comments if they think about them in connection to themselves than if they think about them without reference to themselves. Even though some research has failed to confirm the self-reference effect, a recent meta-analysis suggests that the product is robust overall.

T. B. Rogers and colleagues released the first study on the self-reference effect in 1977. At the time, researchers were particularly interested in how people's minds structured personality information, and Rogers and his colleagues set out to expand Fergus I. M. Craik's and Endel Tulving's work on the depth of processing. According to the depth of processing perspective, certain forms of information are digested more thoroughly or more complex than others.

Words, for example, are recalled better when individuals are asked to think about them semantically rather than phonemically, and they are remembered the least when people are asked to think about them structurally. The degree of processing required to make the decision varies between these three instructions. When the depth of processing is reduced, memory for words suffers.

Rogers and colleagues expected that self-referent encoding would entail even more processing than semantic encoding, resulting in improved word recall. This concept was validated by research, implying that self-knowledge was uniquely recorded in memory.

When people are given self-referent instructions, research consistently reveals that they have a recall bias for words that they perceive as similar to themselves vs. terms that they judge as unlike themselves. This shows that the self-reference effect is highest when people approve features about themselves--Follow-up research across diverse groups and contexts where the self-reference effect is evident supports this bias. Sad people, for example, have better recall for depressed qualities, whereas non-depressed people have better memory for non-depressed traits.

While much of the early self-referencing research in social psychology involved exposing subjects to trait words and measuring their recall using various operationalizations of self-referencing, and while this work may not appear to be relevant at first glance, we believe it provides a foundation for evaluating current communications-related strategies and developing new ones. Advertisers, after all, want to increase the amount of recall and recognition that their ads produce. Self-referencing happens naturally at times, but it is also feasible to urge individuals to link stimulus information to themselves to improve memory of that information.

There has been a rise in cognitive neuroscience research focusing on the idea of the self in the last 20 years or so. The goal of these experiments was to see if any brain areas could explain the encoding advantages associated with the self-reference effect. A big deal of study has been done on the cortical midline area, which comprises multiple brain regions. Brain imaging investigations have highlighted the subject of whether neuronal activity in cortical midline areas is self-specific. To address these issues, a quantitative meta-analysis involving 87 studies and 1433 people was done.

In addition to parts of the prefrontal cortex, research suggests that portions of the parietal lobe are involved in activating the self-reference effect. There appeared to increase in BOLD signals within the medial and lateral parietal cortex during fMRI during self-referential tasks. To see if the medial parietal lobe plays a role in self-referencing, individuals were administered transcranial magnetic stimulation over the area. When compared to recall of evaluations of others, stimulation of this area resulted in a reduction in participants' capacity to retrieve earlier judgments of the mental self.

When students are asked to recollect memories, they frequently struggle. As a result, it's critical to comprehend the impacts of self-reference encoding on pupils and how it might help them remember more information. The goal of this research was to look at the consequences of self-referent encoding. The study's goal was to determine the relevance of the self and how it is involved in the processing of personal data. The self-reference effect is a reliable encoding approach that has proven effective over the last 30 years. This study aimed to gather students and split them into four task groups, each of which would be required to say yes or no to a characteristic adjective that was provided to them. In the first and second experiments, young and older individuals are provided with encoded descriptors and must select whether or not they describe themselves. The final investigation is to see if they found these characteristics attractive to themselves. With the self-reference effect, the age difference was demonstrated to be effective, with older persons exhibiting improved recognition for self-referenced items that were related.

Because the self-referencing process is crucial in how people pay attention to and absorb information, marketers might benefit from a better knowledge of how self-judgments affect people's impressions of commercial stimuli. Although marketers frequently employ intuitively practical techniques, they rarely investigate the reasons behind their success. It appears that these reasons are commonly found in the self-referencing phenomena. To that degree, its explanation should explain more thoroughly the efficiency of presently utilized tactics and prescribe future modifications.

The self-reference effect describes people's propensity to better remember information linked to them rather than information that are not related to them.

In this example, Optimizely personalize its headline to the email address the user has entered. Since the content is related to the company they work for, chances are users will better remember it. 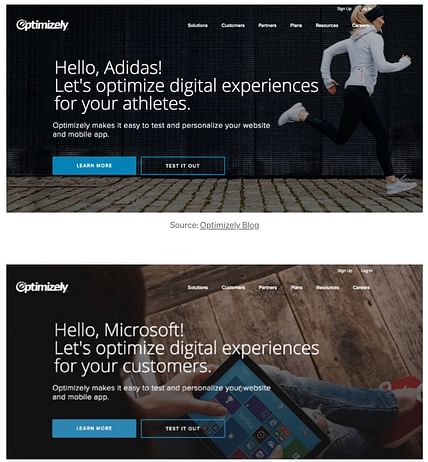 If we add a personalized headline, then conversions for users on mobile devices will increase, because of Self-relevance Effect.