What is the Nostalgia Effect?

We place a more significant value on social relationships and a lower value on saving money due to nostalgia or emotion for the past. The nostalgia effect refers to nostalgia's influence on our propensity to spend money.

Where this bias occurs

Alex is budgeting carefully and working toward their long-term objectives of purchasing a home, owning a great automobile, and leading a comfortable lifestyle. They aren't spending money on anything that isn't necessary. Then, one day, while watching television, Alex notices a commercial depicting a family on vacation in a national park. Back at their hotel, they're seen exploring gorgeous paths, swimming in lakes, and laughing together over supper. This commercial transports Alex back to their childhood visits to national parks with their families.

Exploring the trails with their siblings is one of their favorite memories. Alex feels compelled to organize a holiday with their buddies. They may hire a cottage for the weekend and spend it hiking, swimming, and just being together. After all, Alex argues, making memories is more important than saving money. In this case, the nostalgia Alex had when watching a commercial depicting a family vacation made them more willing to spend money for the sake of social connectedness, even though they had been quite thrifty previously.

The nostalgia effect, by definition, makes us more ready to spend money. This might be an issue if we're trying to save money, like Alex in the previous scenario. Consider if you would buy anything if you weren't basking in the light of nostalgic recollections before making an impulse purchase.

Companies frequently take advantage of the nostalgic effect by promoting their products in a way that evokes nostalgia and encourages customers to buy. These advertising have a broad reach and can persuade a large number of individuals to purchase the promoted goods. Marketing teams use nostalgia as a powerful weapon, and by utilizing it well, they may considerably enhance product sales.

Nostalgia evokes sentiments of social closeness, making us feel as if we are part of a social network. Surprisingly, social connectivity reduces our need for money by making us feel less reliant on it because our network of friends and family is there to support us.

Nostalgia, according to research, makes people feel more socially connected. Significant individuals in our life frequently appear in nostalgic recollections, making us feel more closely linked to our social network. One study found that individuals assigned to write about a reflective incident felt more loved and protected than those set to write about autobiographical situations that did not provoke nostalgic sentiments. A two-step procedure produces the nostalgia effect. The first phase involves recalling nostalgic recollections, which makes us feel more socially connected. The relationship between social connectivity and money is the subject of the second stage.

Money is a valuable resource that makes it easier to meet our fundamental necessities. These demands, however, can be met if we have a robust social network to rely on. As a result, having a lot of money may make social connectivity appear less significant, while having a lot of money might make social connectedness seem less critical. "Nostalgia Weakens the Desire for Money," a study by Janinne D. Lasaleta, Constantine Sedikides, and Kathleen D. Vohns was published in 2014. We tend to perceive money and social connectivity as interchangeable, according to one of their preliminary results. As a result, nostalgia's sentiments of social closeness make us less likely to save money. The second phase in the nostalgia effect happens after nostalgic experiences have increased sentiments of social closeness. Our need for money is lowered in this stage as our sentiments of social connectedness improve, causing us to be more inclined to spend our money.

Knowing about the nostalgia effect might help us be more frugal with our money. Whether you're ready to make an impulsive purchase, take a moment to consider if it's something you truly desire or if it's merely being sold in a way that evokes sentiments of nostalgia. We can make better financial judgments and adhere to our budgets by avoiding the nostalgia effect.

How to avoid it

Stop and think about why you're feeling compelled to make an impulse purchase. You may have succumbed to the nostalgia effect if something you're considering spending money on reminds you of anything from your past. If that's the case, it could be a good idea to wait until you've taken off your rose-colored glasses before making a purchase. It's excellent if you still believe the purchase is a good idea when you're not in such an emotional mindset. However, if you realize it's not something you're willing to spend your money on, you'll escape the regret that comes with making an impulsive buy while in a nostalgic trance.

How it all started

Lasaleta et al. published one of the essential works on the nostalgia effect. Their study, "Nostalgia Weakens the Desire for Money" (2014), summarizes the findings of six research that looked at how nostalgia affects how we value money. They showed that nostalgia makes us more ready to spend money, proving the nostalgia effect. They also discovered that while nostalgic individuals were prepared to contribute more money, they were unwilling to give more time, demonstrating that the nostalgia effect is money-specific.

Furthermore, individuals in the nostalgic condition assessed money as less significant and attractive than those in the neutral state. Participants who felt nostalgic were also less likely to work hard to get money. Finally, they showed that heightened sentiments of social connectedness play a role in the association between nostalgia and increased spending readiness.

The "dictator game" is one of Lasaleta et al.'s experiments as part of their nostalgia study. Half of the participants were instructed to write about an emotional experience in this experiment, and the other half were asked to write about a neutral, ordinary memory. The participants were then informed that they would be participating in a game that the lab was pilot-testing. Of fact, the lab wasn't working on a game; the game was only a tool for them to test how nostalgia affected people's willingness to commit money or time.

The game was straightforward. The role of "proposer" was allocated to half of the participants, while the "receiver" was assigned to the other half. These positions were chosen at random. The proposers were told they had nineteen hours or dollars, some of which they had to send to a receiver down the hall and the rest of which they could keep. Proposers in the money condition received a total of $4.75 in 25 cent coins. The units of time in the time condition signified how early they might quit the experiment, with a total of nine minutes and thirty seconds - or 19 units of 30 seconds - available.

The results of this investigation were eye-opening. Participants who remembered a sentimental recollection handed out more money but less time than those who placed a neutral experience. This not only validated the nostalgia effect, but it also revealed that it is solely applicable to money; it had no bearing on people's desire to give away their time.

The nostalgia effect states that nostalgic sentiments increase people's willingness to spend money. Naturally, marketing firms have taken notice and exploited the situation. Several advertising campaigns have achieved significant success using the simple method of blending something old with something new. Taking something that makes people nostalgic and giving it a new, exciting spin appears to be the winning formula for persuading people to open their wallets.

Pokemon Go, an augmented reality game that debuted in 2016 and caused a lot of buzzes, is a good illustration of this. The game reintroduced people to their childhood love of Pokemon in a new and exciting way. It evoked nostalgia while being current. It would be an understatement to suggest that the game was a cultural phenomenon. People are more willing to spend money when they are made nostalgic by commercials; according to Lasaleta et al., the nostalgia evoked by Pokemon Go may have helped its downloads and the amount of in-app purchases made.

When we are nostalgic about something, we tend to place a more significant value on social relationships and a lower value on saving money.

Nike is calling our childhood memories by bringing back the original version of the iconic trainer from 1982. It was the first basketball trainer designed by Bruce Kilgore (product designer at Nike). This way forever #NBA and #hip-hop fans are jumping back in their old memories, without checking what's let in their wallet ! 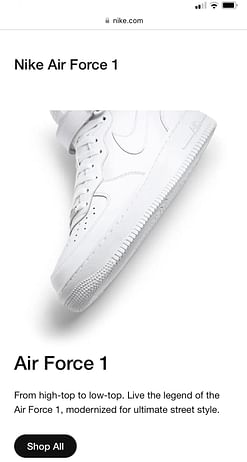 If we add nostalgia to our hero banner, then click through rate for all users on all devices will increase, because of Nostalgia Effect.