Theory explained by Oreoluwa Akinnawo and written by Peter Wason

The Confirmation bias, also known as Confirmatory Bias, Myside Bias, and Observational Selection, is a bias to search for, interpret, and favour information that confirms one’s current beliefs or hypotheses.

Essentially, the Confirmation Bias means that people will only follow their guts because it is tied to a strong emotional reason and will ignore everything else irrespective of the evidence that proves they are wrong to think so. For example, your website sells one specific type of running diet plans for weight loss but it isn’t suited for vegans, irrespective of the evidence you can offer to show that the vegan running diet plans are not essentially better than your non-vegan plans, you would not be able to convince them to convert.

How Can One Use the Confirmation Bias?

The truth is we’re suckers for believing what we want to believe. As marketers, it’s much easier for us to roll with people’s preconceived ideas than try to change them and this is the entire premise of using confirmation bias in marketing. Most decisions customers make are not backed by logical reasons but emotional reasons.

It’s an incredibly powerful psychological characteristic we all share. But we have to remember we’re just as susceptible as our target clients – especially when it comes to data and conversion optimisation.

As marketers, we are in a unique position to help inform our target audience’s beliefs around our products and services and then supply the evidence that confirms those beliefs. It’s why we believe that big brands are fancier than store brand generics. It’s why even though studies prove that most vitamin supplements are useless, we still buy and take them.

Take advantage of clichés and stereotypes: In an ad run by Apple for their Ipad Pro, a copy stuck out ‘’ Your next computer is not a computer ‘’ leading people to believe that the Ipad pro can successfully replace your computer even though there is strong evidence that proves this copy is misleading, to say the least, but it works for them as people who purchase Apple products do so with a cult-like appeal.

Address pain points: People want to believe that there is a solution for their problem that's why they are drawn to arguments that promise them a feasible remedy for it. The closer you get to understand what your customers’ pain point is, the more clearly you will be able to address these in your customer value proposition, and the more likely your customers are to select your company over a competitor. However, confirmation bias has another impact: customers are often not fully aware of their problem. By addressing their pain points, you can confirm unconscious fears, only to then present your suitable solution to a customer who is now receptive.

Use testimonials: You want to be right. but sometimes, other thoughts can make you question your beliefs. The same is true with your customers. If you want to help them confirm what they already believe to be true, you can use a testimonial that helps prove a claim.

These are theories which have overlap with the theory you're currently looking at, it's worth exploring them. 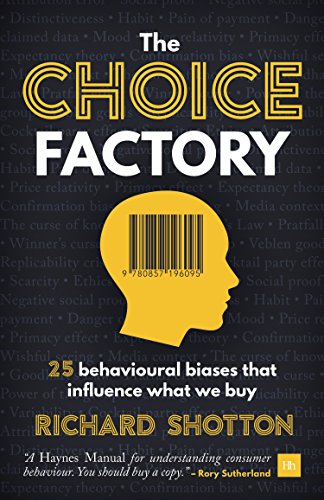 The Choice Factory: 25 behavioural biases that influence what we buy by Richard Shotton Buy this book