We all have favorite restaurants. Let's assume going to one of your favorite restaurants and tasting that delicious appetizer or may be a Cocktail. Then you see this new dish on the menu and order it. Unfortunately, it happens to be the worst dish that you have ever tried in the restaurant. What happens to the great impression you have always had about this place? Do you still have it or will you ponder upon the fact that you tried the worst dish ever there? Most of us will think about the bad experience that we just had and won't be able to recall the wonderful appetizer and the cocktail or all the other previous delicious dishes right after the bad experience. This tendency of human psychology is known as the Negativity Bias.

According to the Negativity bias, we tend to pay greater attention to bad things over good things by making bad experiences more important to kill all the fantastic ones. Even though we don't give much thought to this, the Negativity Bias can create a powerful effect to influence our decisions and behavior. Therefore, Negativity Bias plays an important role to influence consumer decisions in online platforms and in digital marketing. Every business online should have a clear understanding on the damage that can be created by this tendency of human psychology in order to prevent it or to weaken the adverse effect which was already done by it.

Why does the Negativity Bias occur?

How does the Negativity Bias affect online businesses?

Negativity bias can strike your online business through negative reviews and comments. Before we buy anything online, the first thing that we all check is the reviews posted by the people who have actually purchased that product or service before. Having a few negative comments amidst many positive comments will still draw the focus to the negative ones because we fear we also may face those consequences. As a result, the Negativity bias can adversely affect online business in the following ways.

They will undermine the reputation of the business.

It doesn't matter for how long you have been building up your reputation. 50% of the customers will still question the credibility of the business after a few negative reviews.

It is the most painful hit for conversion rate Optimization (CRO)

This happens because only the best enterprises will be recommended by the search engines to the users.

It is the ultimate hit for profitability.

What can we do to weaken the impact of the Negativity bias to boost CRO?

Responding to negative reviews immediately is absolutely vital than ignoring them. Once the negative reviews are responded, they should be addressed immediately too, letting your customers know that you're responsible for what went wrong and credible. According to a research done by Forbes, 45% of the customers tend to visit the online stores who respond to negative comments and reviews effectively. This can eventually boost Conversion Rate Optimization (CRO).

Uplift yourself out of the negative mindset by highlighting your values

The key is to direct the attention of your customers to somewhere positive. Treat them with new and refreshing experiences; maybe you can give some discounts, offers or free trials. They should be strong enough to bring your target consumers the joy.

These tools can help you a great deal towards Conversion Rate Optimization (CRO) by ensuring you have a positive reputation online. Such applications come with tools to assist on how to deal with negative reviews effectively.

According to human psychology, we have this tendency to ponder upon negative experiences over positive ones which is known as the 'Negativity bias.' This bias plays a major role to shape up the consumer decisions; therefore it's not something that businesses should overlook. Negativity bias acts adversely towards Conversion Rate Optimization (CRO) especially in the online platforms, through negative reviews. The path that businesses should take to overcome this problem is to recognize what went wrong and act immediately to correct the course of action to build credibility in order to boost Conversion Rate Optimization (CRO). 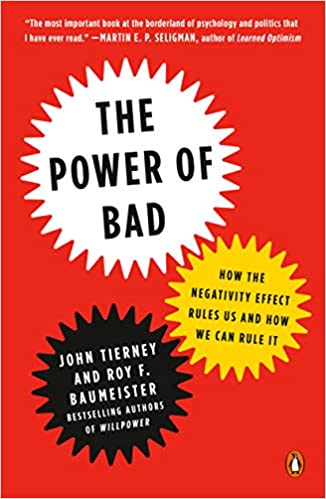 The Power of Bad: How the Negativity Effect Rules Us and How We Can Rule It by John Tierney & Roy F. Baumeister Buy this book
-->